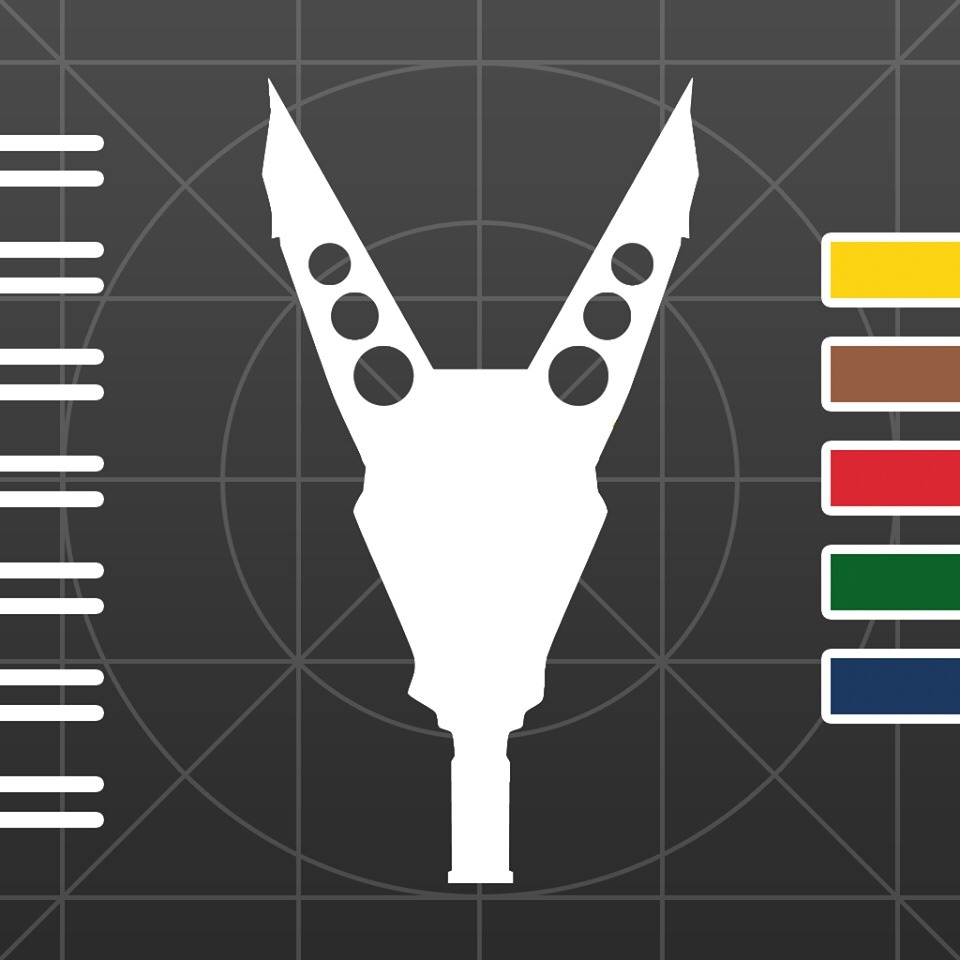 Weber Rescue UK are pleased to announce the arrival of the NEW WEBER RESCUE Systems “Tips and Tricks” App (iOS and Android) is now available in English! You will find great step-by-step instructions for a faster and safer extrication.

The language of the APP depends on the language setting of your phone. So if you had already downloaded the first version of the app in German then all you will need to do is to update the App through the relevant App Store. It will then update to the English language.

With just a month left until the doors open for the UK’s leading event for all emergency service workers, Emergency Services Show 2015, at the NEC on 23rd & 24th September, things are in full flow at Weber Rescue UK HQ. For those that could not make it Interschutz 2015 (The world’s most renowned exhibition for rescue workers, firefighters and related professionals), we will bring you our next generation of Battery Rescue Tools, E-FORCE2. These tools are lighter, yet still boast the same power. Speed has increased while not comprising the control. To experience the new “FORCE” in the market then make sure you join us on our stand, C16 in Hall 17. You can register for the show by clicking here. If you are unable to make it then make sure that you check out all the new features of E-FORCE 2 by checking out our videos on our YouTube Channel:

Weber Rescue UK recently returned from a successful & productive Interschutz 2015 where we saw the release of Weber Rescue Systems E-FORCE 2 range of Battery Rescue Tools. The development from the original E-FORCE tools sees a new technology implemented into the drive unit to improve speed, performance and importantly extended battery life. There was also the release of many other products and updates to the Weber Rescue product range. These updates are all available in our Interschutz News brochure which can be viewed by clicking here . If you require further information then please do not hesitate to contact our Sales & Service Centre on 01924 339911 or send an e-mail to rescue@weberuk.com

Weber Rescue UK will be attending this year’s Interschutz Exhibition in Hannover. We’ll be on the Weber Rescue System’s stand G04 in Hall 26. While we are there we’ll be providing coverage from the stand through our Facebook page (www.facebook.com/weberrescueuk) & our YouTube Channel (www.youtube.com/weberrescueuk). You can find more information about the Weber Rescue Systems stand by visiting this dedicated section to the show: http://www.weber-rescue.com/en/interschutz/index.php . In the meantime you can look back at an interview with our Director, Richard Wood from Interschutz 2010:

In this interview Richard talks us through the “New Blade Technology” which Weber-Hydraulik had brought to the market. The market has certainly evolved since then as this year’s focus will certainly be Battery Rescue Tools. We look forward to welcoming you all to the Weber Rescue stand (G04) from the 8th – 13th June in Hall 26. 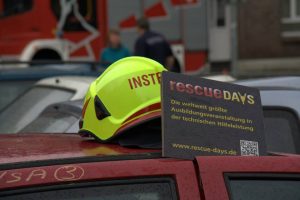 Weber Rescue UK Ltd are giving members of the UK & Irish Fire & Rescue Services the opportunity to attend the world’s largest training event on technical rescue, Rescue Days. Organised by Weber Rescue Systems, this year’s event is due to take place in Germany’s capital, Berlin. You can find some initial information by visiting the Training Area of our website under the support tab and you can still sign up for further information here: https://www.weberrescueuk.com/rescue-days-sign-up/

If you’ve already registered you will receive information about costs and booking shortly. We look forward to seeing you there!!

The BC 250 concrete crusher is suitable for the toughest applications following natural disasters, such as earthquakes and building collapse, and for applications following industrial accidents. Even the thickest chunks of concrete can be quickly broken to provide rapid access to survivors.
The rotating handle enables optimum positioning of the crusher. Its protective shield protects again dust and fragments, and can also be turned. The tips can be replaced as in almost all WEBER RESCUE cutting equipment.
The concrete crusher can be delivered as a conventional hose-connected version (BC 250) or as a battery-operated version (BC 250 E-FORCE). The battery pack is compatible with all E-FORCE rescue equipment and the Milwaukee battery pack saws.

Our friends at Genesis Rescue Systems (The brand name for Weber Rescue Systems in the USA) recently put the BC250 E-Force through it’s paces. Watch the video above to see some of the results!!

Oxfordshire Fire & Rescue Service has recently taken delivery of two new Light Response Vehicles. The John Dennis built ‘Canters’ are rated at 7.5 Tonnes are equipped to deal with all regular incidents such as house fires and road traffic collisions. It is equipped with our latest Dedicated battery operated E-Force equipment and includes a SP35L E-Force Spreader, RSX180-80Plus E-Force Cutter, RZ1-910 E-Force Ram & Extensions, 110V Continuous Working Cable plus the latest Weber Rescue Systems 5Ah Lithium Ion Batteries. The new 5Ah Lithium batteries are able to give the user over double the amount of time compared  to the original 3 Ah ones and don’t forget that these batteries are compatible with all 28v Milwaukee Power Tools. 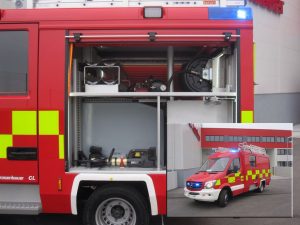 Rosenbauer UK has bought the first of it’s demonstrator “Compact Line” Fire appliances to the UK. This particular CL Appliances is based on a 5.5 tonne Mercedes Sprinter and can seat up to 6 personnel including the driver. This CL Appliance has been kitted out with a Weber Rescue Systems SPS360L E-Force Battery Powered Combi Tool. Powered by a 28V Lithium Ion Battery in either 3 A/Hr or 5 A/Hr capacities it eliminates the need for a conventional hydraulic power unit and hoses, creating an overall smaller footprint for the vehicles hydraulic rescue equipment. Therefore allowing vehicle manufacturers to add extra equipment and/or stowage. With a max spreading force at working range of  up to 70 Tonnes and a Cutting Force of up to 50 Tonnes the SPS360L E-Force is truly an ideal & versatile tool for the small appliances.

News
We would like to take this Opportunity of wishing you a
Merry Christmas and a Prosperous and Peaceful New Year.Please note that our offices will be closed from Friday 22nd December to 2nd January 2018. In case of emergency please e-mail rescue@weberuk.com 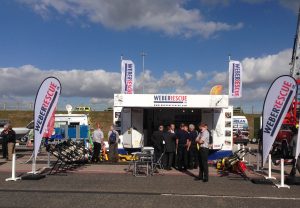 Where have these past four weeks gone! It feels like only the other day that we were back at the NEC, Birmingham for this year’s Emergency Services Show. Yet four weeks have managed to slip by mainly organising all the enquiries and demonstrations received from the show. The weather stayed kind to us again this year and on occasions the sun shone right down on us as we unveiled some of the new items as you visited our stand. The main piece being our new 28v 5 amp/hour batteries for our Battery Operated E-Force tools. Producing an improved operating time over the standard 3 amp/hour batteries. Compatible with all current E-Force tools this small yet significant addition to the range will be hugely popular.

Another key addition to the E-Force range is the New Door Opener now available in Tactical Black. With over 10 Tonnes of pushing force most doors are no match for this powerhouse. This also benefits from the fact it is “Grab & Go”, as there is no setup with a manual pump and hoses. It can literally be lifted from the vehicle and with the battery attached switched on and ready to force open doors. This is just one item in the Special Tactics and Specialist Equipment from Weber Rescue UK, with other items such as the E-Force SPS270 Combi Tool and the SPS260H Manual Combi Tool also available in black with more info to follow in the coming months.

We would like to thank all that attended and visited our stand. It was great to see some familiar faces while also meeting some new ones.

This website uses cookies to improve your experience while you navigate through the website. Out of these, the cookies that are categorized as necessary are stored on your browser as they are essential for the working of basic functionalities of the website. We also use third-party cookies that help us analyze and understand how you use this website. These cookies will be stored in your browser only with your consent. You also have the option to opt-out of these cookies. But opting out of some of these cookies may affect your browsing experience.
Necessary Always Enabled
Necessary cookies are absolutely essential for the website to function properly. This category only includes cookies that ensures basic functionalities and security features of the website. These cookies do not store any personal information.
Non-necessary
Any cookies that may not be particularly necessary for the website to function and is used specifically to collect user personal data via analytics, ads, other embedded contents are termed as non-necessary cookies. It is mandatory to procure user consent prior to running these cookies on your website.
SAVE & ACCEPT
Back To Top